After 5/26/19
New Venue?
A lot has happened since our last official race. When One-9 abruptly closed their doors, the club was put on hiatus until a new venue could be found that didn't charge an arm an a leg for rental fees. While driving around town, I discovered a new hobby shop, HobbyTown on Frankford Ave. I stopped in a lo and behold, they had Mega G+ cars for sale! Not a big selection, but something is better than nothing. Talking to the young lady who owns the shop, I discovered that they have a large room behind the shop where they race RC cars. Now we are negotiating the use of the space for HO scale racing. The owners knowledge of slot car racing is limited, but I think once they see it in action, they will be impressed. Hopefully I'll be able to post a schedule soon.

Bowman Track
I ordered a custom track from Brad Bowman, and it should be arriving sometime in June. The track will tie in with our AF/X track for club racing, allowing for larger race circuits. I will add more of the custom track as my budget permits over the next few years, with the eventual goal of "big track" club racing exclusively on custom routed layouts.

Gilmore Track
I purchased a 45 foot Wizz track from Lonny Getso of THOR Racing Club in Dallas. It sits on a 4x16 table, and will be my "home" track. Club races will be scheduled to race on the "Gilmore" as well as at HobbyTown. Its a fast raceway that will challenge the racers.

New Racing Classes
I'll be updating the site in the next week or so to reflect some new racing classes we will be adding to the club schedule. We will be adding a "Spec Stock" class, and a "Modified" class. That saying that once you go fast, you never go back has some truth to it.

Check in for further updates! I will updating the site a lot the next month or so! 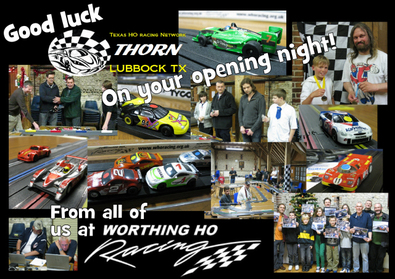 5/4/2014
IROC Race
Last nights inaugural IROC race went pretty well from a technical standpoint. All system were go, and we had no technical issues worth mentioning. Race Coordinator worked great, and there was good power around the entire track. Turnout was small, but those who participated had a great time with some close racing in every heat. Thanks to Ron and Mike for getting things setup, Darryl from Amarillo for making the drive down, and for providing and working on the cars. Darryl even built 6 fresh LifeLike M chassis cars on the spot when we had guide pin breakage issues with the T chassis cars. We also had a racer from out of the state, Gary from Clovis New Mexico, who hadn't driven a slot car since the 1960's. Gary quickly got into the rhythm of things, and proved that driving old Aurora T-Jets as a kid was good training for whipping an inline magnet car around a big track.

Now to focus on getting more drivers. I'd like to at least double if not triple the attendance for the Open Wheel points race on June 7th.

Next Race
Mark your calenders. The Championship Points season begins with the next race on June 7, with bragging rights and the Club Championship Trophy on the line. We'll be moving from super fast tri oval racing to a technical road course in the clubs inaugural Open Wheel race. But don't think the open wheel cars are slow, they handle the turns very well, and should provide for some tight wheel to wheel racing.

5/2/14
We're ready, are you?
The eyes of the world HO slot car community are on Lubbock as we make the final preparations for our inaugural race tomorrow. We've been getting allot of messages of well wishes and congratulations from all over the USA and our friends across the pond. We're hoping for a respectable turnout. Bring a smile for the cameras, and get ready for a great night of racing!

4/23/14
Track Arrived
A big 21 pound box of track arrived today. Its going to be a busy weekend getting the lanes painted and building saw horses for the tables. Race day in less than two weeks! We'll be ready.

4/20/14
Track on the Way
Placed a large track order a few days ago which, according to USPS tracking, should arrive next week, leaving plenty of time to get the lanes painted before the IROC race. The order consisted of 30 pairs of 15" straights, 360 degrees each of 12",15", and 18" turns, and four new Parma 35 ohm controllers. Its not as much track a I originally had planned, but its plenty enough to get things rolling. I intend to add more inventory as the year goes by. I'd like to double the track inventory over time so we'll have more flexibility in track design. This new track will be added to my current track inventory for club racing.

Preparing for Video Production
Photography and video will be a big thing at club meets, and I want our club videos to really stand out and be unique. In preparation for that, I've designed two different templates for graphics, one for the stock car class, and the other for the open wheel class.  I've also been looking for music for the video's and have found a few tunes that are super cool racing oriented tunes, with a mix of redneck NASCAR songs to hi tech F-1 stuff. The video for the IROC race is going to ROCK!

3/31//14
Minor Rules Update
Made a couple minor changes to the rules. One concerns Practice at race meets, added a new legal body type to the F-1 class, and redefined the section concerning controllers.

Timing System Installed, technical work 95% complete
The Trackmate infrared timing system got installed today. Had a minor issue getting the Race Coordinator software to recognize the hardware, but a simple unplug and plug back in of a USB connection solved the problem. Ran a bunch of laps on all the lanes, and everything is working perfectly! Now to get all my RC stuff ported over to the laptop, and work on the extended Windows so we can use at least two screens - one for the drivers, and one for Race Control. Now that the computer is wired in, the vast majority of the technical work is complete. 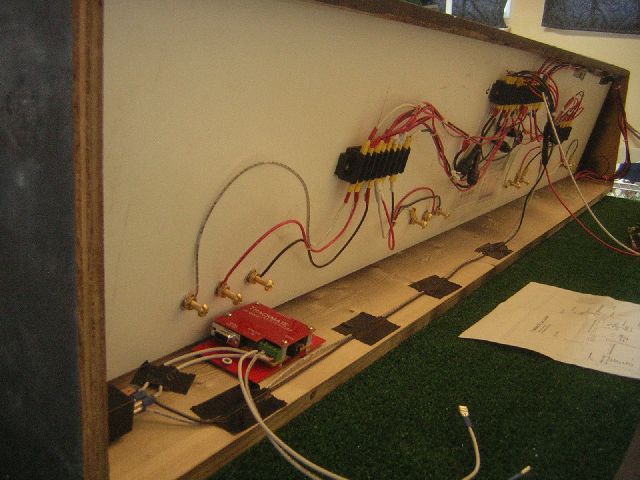 The Trackmate computer board mounted inside the drivers stations box.
3/28/14
Drivers Stations Built
Race day is getting closer and we're hard at work getting everything ready! Spent the last few days getting the drivers stations built. I think they came out pretty nice. Next up, installing the timing system.
2/12/14
Venue Secured!
Get your cars ready to race! An agreement has been reached with the One-9 Sports Facility to rent space to hold our races. All of the club races will be held on Saturday nights. The One-9 guys were very helpful and accommodating of our needs, including allowing us to store our tables at the facility. The space is large enough to hold two full basketball courts, and we will have the entire building at our disposal.

1/27/14
Racing Tires
Just a quick note to say thank you to "Frank the Racer" for offering us a club discount on bulk orders of Super Tires. We will be placing an order for silicone and urethane tires before our first race so they will be available for purchase at our meets. Be sure to check out his site on our links page.
1/25/14
Venue Found?
Serious progress is being made in preparation for the inaugural THORN racing event. With 1001 things on my list to do, one of the heaviest things weighing on my mind is to find a suitable venue. That issue just may be solved. I visited a local sports complex called One-9, which is an old cotton gin facility that has been converted to a sports complex. the buildings are huge, with so much indoor space that a local RC Flying club rents space there twice a month to fly their helicopters and planes, obviously plenty of room to host a HO big track racing event. The facility has bathrooms, shower facilities, locker room, even a snack bar. Besides being perfect for THORN events, it would be a great place to hold a major racing event in the future. The guys I talked to at One-9 were very enthusiastic about THORN holding events at their facility. I'll be talking with them more next week to work out details. It might be jumping the gun a bit, but I am confident enough in their comments and attitudes that I have posted Race Dates on our schedule page. Keep your fingers crossed that all goes well! Check out the link below to see the facility.
One-9 Sports Complex