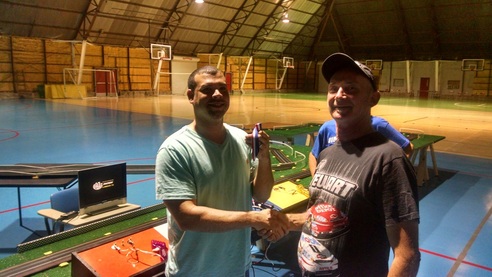 With the closing of One-9, we lost our venue for a while. But we may have found a new home at HOBBYTOWN hobby shop on Frankford Ave. The have a large space behind the shop they use to race RC cars, and have expressed interest in hosting THORN events. We look forward to working with HobbyTown, and getting back to Big Track racing!

What is the Texas HO Racing Network? 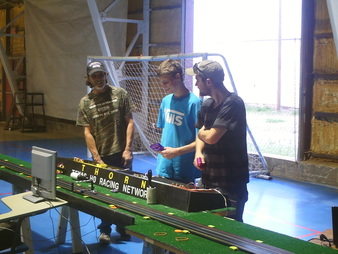 The Club   We are a group of slot car racers that build large four lane race tracks in a public venue, and invite everyone to come race with us. We provide loaner cars and controllers to those who don't have their own equipment, but it is much more satisfying to build your own race car to compete with.

Walther's LifeLike NASCAR
The Cars  We race H:0 scale cars (about 3 inches long) that have electrically powered inline armature motors. We race cars built by all the major manufacturers such as AF/X-Tomy, Tyco, and LifeLike. 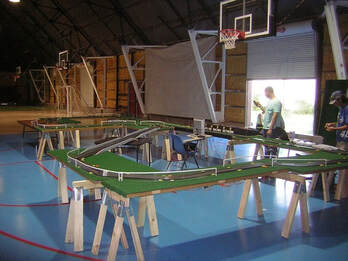 Open Wheel circuit from June 2014
Big Tracks  The main point of building our tracks in public venues is that we can build "Big Tracks" that are much too large for most of us to build at home. Its a different style of racing that we have imported from our English counterparts. 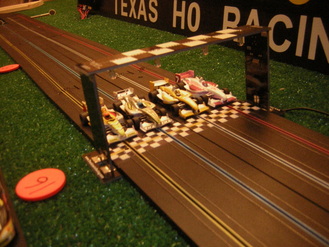 Open Wheel racing with AFX Mega G's
The Racing  We utilize the latest infrared and computer timing technology to manage our races. The computer tracks your lap times down to 1/1000 of a second. The drivers rotate and race on each lane of the track in heats. The race winner is determined by which driver completed the most laps at the end of the race.

Between heats, drivers act as corner marshals to put crashed cars back in their lane.